If you are following this blog then you will already know about the compost making process that we use on the Sands at Nomad's farm. Recently however we have identified quite a serious problem that we were actually encouraging due to our compost making technique.

We LOVE Millipedes (Aka Chongololo or Mombasa Train) on the farm as they have proven to be one of the fastest decomposers, if one opens any of our compost piles or even has a look into our final compost product one would notice there are quite a few Millipedes of different types and sizes.. all doing their thing, eating rotting organic matter and pooping out nutrient rich compost.

We noticed this problem when we planted some spinach in one of the old broken Jacuzzis. Just before planting we added some compost to the soil, then we planted, watered with rain water and waited. Within a couple of days the spinach seeds had germinated in neat little lines, so satisfying.. the next day 95% of them were GONE!

What happened! Well, the Millipedes did their job and made the compost, many of the little ones were still in the ready compost when it was added to the Jacuzzi, They were trapped inside as they cannot climb the inside walls.. they had no decomposing matter to eat.. so they ate our spinach seedlings and then buried themselves into the soil during the day. 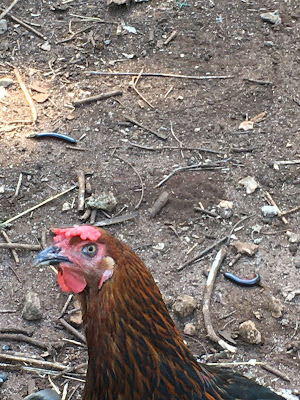 Having identified the pest (who we knowingly created perfect conditions for) we tilled Jacuzzi and removed over 20 Millepedes who were hiding in the soil.

Loosing the Spinach seedlings was sad but problems like this go hand in hand with organic (pesticide free) farming.

There is however bonuses we take from this- Now that we have recognised that we have been breeding Millepedes which can be detrimental to a farm we are making sure that there are no Millepedes in the final stage compost before it is put in the grow beds.

The extra extra bonus? Think 'Circular Economy', a Sustainability jargon word. The Millipedes (and other pests), collected from the compost, put into a bucket and then taken to.. drum-roll.. the Chickens! This adds to their free range diet if they agree to eat it. Chickens can be picky peckers.

NB- for those of you that have thatch roofs like many of us on the Kenyan coast.. be very aware of putting your compost pile too close to the house. If you breed Millipedes and they are able to climb into your roof the 10 year lifespan Makuti (coconut thatch) may be gone and need replacing in 5 years. Keep them far away. ;0)

SOME OF THE ONGOING PROJECTS THIS WEEK

These past two weeks at The Sands at Nomad have been full of action on the sustainability front. Building projects repurposing glass bottle... 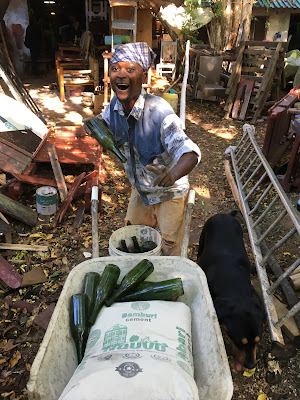