The online dictionary says sustainability is:

‘The ability to be maintained at a certain rate or level’.

So imagine that sustainable is the ability of  house, farm, hotel, field, forest, country, city, town, people or one person to be able to live in balance with their environment mutually benefiting from being part of the natural system.  Something which would be almost impossible in this day and age other than for some smallholdings and closed communities.

The Sands at Nomad Thinking Green initiative has been set up to showcase to anyone interested some ideas about sustainability and  some ways in which a Hotel, Dive Center and a Restaurant can reduce their impact on their environments, both social and natural.

The Sands at Nomad APP 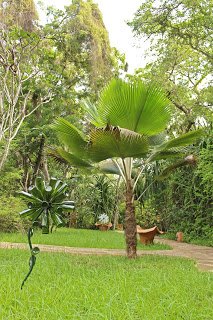 Since 2005 The Sands at Nomad Boutique hotel, restaurant and connected dive center have been making headway towards reducing their impact on the environment.

All plastic water bottles have been removed from use, candles in the restaurant are LED and rechargeable so removing the use of paraffin based candles, empty glass bottles from the restaurant and hotel are all stored and either refilled for use again used as drinking glasses, art pieces or building bricks. Old diving wet suits have been cleaned, cut and reused into drip mats and computer bags, 80% of guest rooms use the sun’s renewable energy to heat water, all light bulbs are LED low watt bulbs, water points have been created for local wildlife, bathroom products are locally sourced and biodegradable, it holds local farmers markets, it is a ‘fumigation free’ property and it has it’s own ‘The Sands at Nomad’ APP which is downloadable for free so as to try to reduce the amount of paper, printing and laminating use.


When the path being taken is a green one there is no better place to start than in a section of threatened, green, corral-rag coastal forest. Imagine that the forest found around The Sands at Nomad is one of the last remaining pieces of coastal forest found along the southern coast of Kenya. Coastal forests like this one used to stretch from Kenya all the way to the north east coast of South Africa, they used to cover close to 300,000 acres and create refuge for huge numbers of fauna and flora. Now-a-days it is said that if all the final remaining pieces of these coastal forests were put back together there would be less than 30,000 acres. That’s a huge loss for Africa and the world, but we at The Sands have a little piece that is protected and we want it to be available for people to see and enjoy. 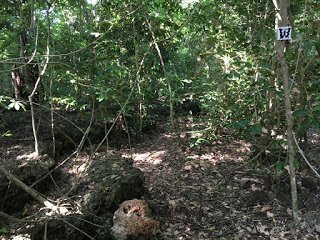 An old corral reef overtaken by forest.
During the long rains of 2017 work started on the Forest trail through the Nomad forest. It was a wet, dirty, slippery and often spikey and stingy affair. When it was raining I was down to only wearing shorts and a cap because of the deluge of water, when the sun was shinning it was the same due to the deluge of sweat. (Note to self- coastal forests can get REALLY hot in still, steaming days). In the course of making the trail the deal was that no branches were to be cut. They could only be pushed, bent or tied back creating a space for a trail. But even then it was difficult to follow.. so I made some trail markers out of recycled 20 liter oil drums and stenciled a butterfly onto these, once these were up we had a forest trail. Now, almost a year later the Nomad forest trail has a guide who takes guests on walks three times a week. It’s an amazing experience to be able to walk from an award winning beach into an indigenous corral rag coastal forest. 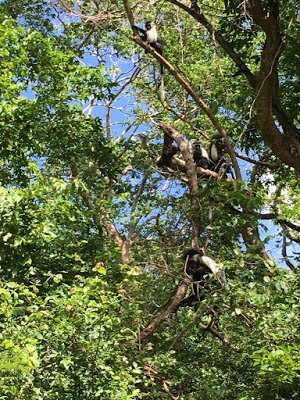