It is always good to write about some of the problems faced in organic farming, others might be able to learn without having to make the same mistakes and maybe our solutions might help others facing the same issues.. in this case SIAFU or Army Ants.

A couple of weeks ago, at eleven at night a call came from the Nomad farm reporting 'Siafu' were in the hen house'. It turned out the invasion was far larger. They were everywhere, the ground around the chickens and compost piles and the growing beds was literally crawling in battle ready ants ranging from a few millimetres to 3 centimetres in size.

We arrived in time to save the hens by setting fire to cut, dry grass and scattering it around the hen house before working our ways down the main 'arteries' of ants pouring in. NB. We were fortunate that we had access to cut, dried grass as we had been preparing to use it for mulching once dried and seeds had dropped.

Invasions like this happen occasionally throughout sub-saharan Africa, usually around the time of the rains when there is plenty of creatures around for the army ants to subdue in a blanket of bites before eating.. they are fully carnivorous ants, no salad for them. On the positive side they can be considered an 'African Spring-clean'. They enter one's house on one side, clean it out of bugs, mice, snakes, rats, and off they go.

In retrospect- the Ants were aiming for the bugs and grubs in the compost piles and the hen house.. not for the hens, but because the sawdust inside had not been replaced in far too long it was full of chicken poop and all the bugs that love that stuff.. all perfect Siafu food.

The compost piles, which were located along the edge of the hen run to make tossing fruit and veg to the hens easy and also so that the compost would attract and breed lots of bugs, some of which would end up in the hen run.. to help their diets be as free range as possible.

The problem is that a colony of millions of Siafu is like a single organism that consumes all slow moving living things in their path.. and we had enticed them right into our hen house.

1.  We will change the saw dust more often, especially during the rainy season.

2.  After using fire to keep them at bay at night when they were most active we then collected some used engine oil from the Generator at The Sands and 're-used' it on all the legs of the chicken house where they were climbing up. We also re-oiled the stand for the Jacuzzi 'wormary' as Siafu LOVE worms.

3.  Wood ash poured on the ground in lines around ant sensitive areas also works until the ash gets wet and then it needs reapplication.

*Interestingly, when the old oil arrived at the farm someone thought it was for pouring ONTO the lines of Siafu! NOT A GOOD PLAN as oil is toxic and farms and ground water is not where it's wanted, keep it on the posts and walls. Luckily not too much damage was done. 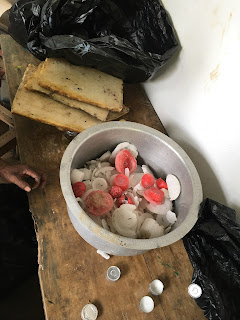