We have already made a couple of posts on this subject but here we are just going to add a couple more ways that we have found to re-use PET plastic bottles. It's short and sweet.

Obviously it doesn't take a rocket scientist to work out that ANY container, made out of ANY material can be useful as a bucket or a raised plant pot, no explanation needed, look how successful the plant nurseries are on the roadsides. 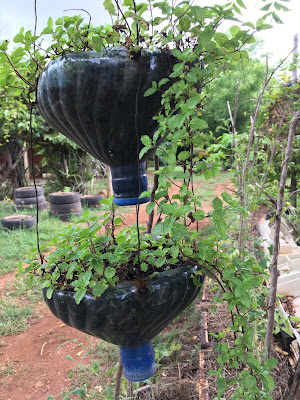 Other ways one can use PET bottles? It depends on the size. In many parts of the world the 1 litre PET bottles are being stuffed with waste/and or Sand so that they can be used as building blocks.

At the Sands we don't have waste PET but after collecting from other hotels and restaurants we have enough 5, 10 and 20 litre bottles that we can use them in other ways. Look how much our Chickens love their laying 'boxes' made out of PET bottles. 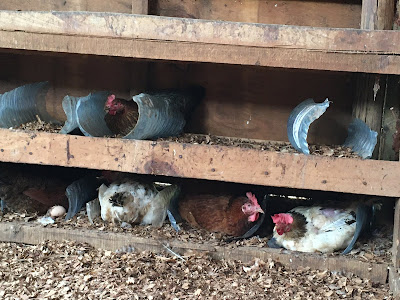 We also use these as feeders to try to minimise the waste of Layers Mash (supplements to egg laying chickens) when the chickens scratch the layers mash from more open feeders like trays. 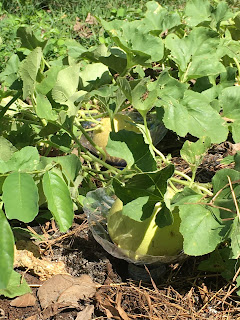 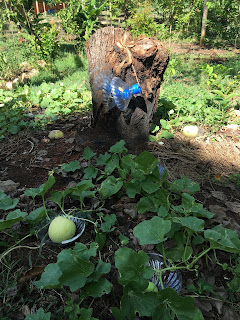 When these bottles are cut often the top of the bottle is not used, it just becomes waste.. or a hanging grow pot for mint (see top photo) 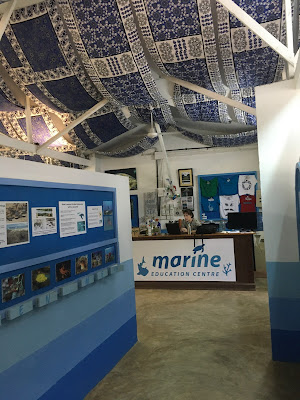 In late 2018 The Sands at Nomad finished renovations on an old boat house turning it into a conservation education and awareness location called the Marine Education Centre (MEC).

Located next to the Sand's recycling centre, a short five minute walk from the Hotel reception through the Corral Rag forest. The centre is open to visitors daily from 3 to 5pm 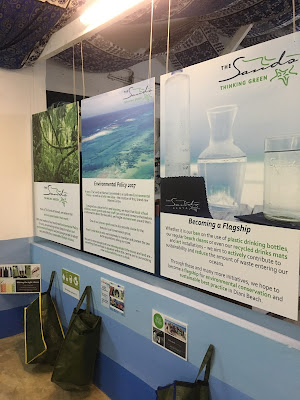 The MEC has now become the home and operating location for three different conservation, education and research organisations all focusing on bringing awareness to visitors on the plight of the oceans the planet the wildlife within.. and how this effects us and our future generations.(Towards sustainability)


The Conservation Education Society  was created as a way to educate and make aware both local and international students on issues such as marine wildlife, ecosystems and conservation. Throughout 2019, 554 students and 71 teachers visited the MEC on ‘ecotours’ which allowed them to take part in specifically designed education programs, from which, it is hoped they taken away knowledge which may help both their own and their (our) planets future. As further support initatives the conservation education society also has provided educational packages for five of the local schools in the area and also provides awareness education for international students. For more info please visit-  www.ceskenya.org 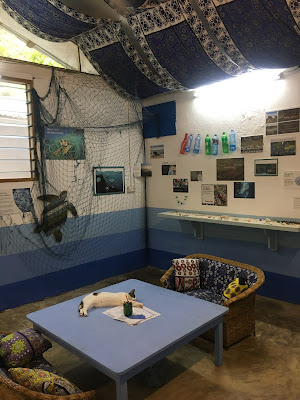 The Diani Turtle Watch was originally started in Diani in 2012 by it’s Watamu based parent organization Local Ocean Conservation. DTW was started with the aim of protecting and creating awareness as to the plight of sea turtles and as an organization seeking to find solutions to the present day problems turtles face when nesting. Around the world, sea turtles are being forced to lay their eggs in bad nesting locations due to beachside development, beach erosion, and nest security from people. For more info on this organisation please visit-  https://localocean.com 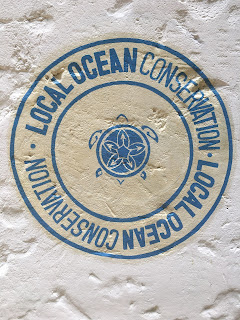 The Olive Ridley Project began working in Kenya through a partnership with The Sands at Nomad and the Marine Education Center.  This Project has begun the first turtle ID database in Kenya which had, at the end of November 2019 and from 1663 sightings, identified and databased 401 sea turtles of which 365 were Green turtles and 36 were Hawksbill turtles. The data collected from this and other projects are useful as key indicators of marine ecosystem health. The Sands at Nomad has, for another year, agreed to sponsor and support the Olive Ridley Project throughout 2020. For more info on this please visit www.theoliveridleyproject.org

·      In the coming year there are plans for the MEC to do marine awareness workshops with some of the local boat operators so giving them knowledge on how to manage visitors as well as understand reasons and best-practice on how to preserve the ocean and interact with marine life.

BELOW ARE SOME BASIC MARINE PROTECTION RULES

It's for the environment and people's livelihoods, please care. 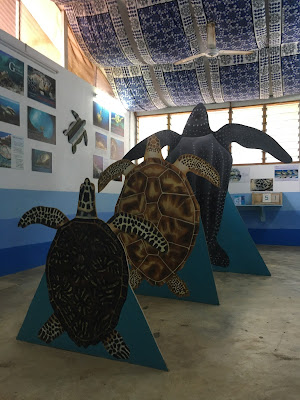 Here at the Sands at Nomad we try where possible to stay away from Paraffin based candles as, one, these candles are a by-product of oil refining and two, the burning of Paraffin candle wax releases small amounts of carcinogenic fumes. Where possible try to buy beeswax or rechargeable LED flickering 'candles'.


However, like most hotels we do have a few candles in use and sadly bees wax candles are hard to find and very expensive.

So what happens to the toxic wax when thrown away? Well, like most things 'out-of-sight out-of-mind' it ends up in a landfill.

At The Sands we have been stockpiling our 'waste' candle wax for four months now. We don't have much but we have enough to try to do something with it.. like recycle it.

We have heated up a large saucepan on a cooker (the second round on a fire outdoors), thrown the cast-off candles and left over wax into the saucepan, let it all melt, removed the left over old wicks, bugs, sand, matches and leaves until we have a saucepan of melted wax.

It is VERY important to note that if you are cooking on a live flame.. wax and wax vapour is flammable so only use low flame gas or coals once the flame has died down and remember.. melted wax is hot!

We brought some normal cotton twine, fixed it down the middle of some 'repurposed' glass jars from the restaurant waste, we then poured the molten wax into the jars letting it cool and solidify.

Once solid and contracted we top up the jar and tadaaa.. a new candle made from waste wax which most hotels would send away and try to forget the damage done.

Sometime ago we posted about the benefits of having a pond (or more than one) in and around your farm, to Re-cap, it attracts and holds natural pest control species like frogs, toads, dragonfly, birds etc and it also provides a water source for your other natural controllers like hedgehogs, lizards and the likes.

Well here we will be talking about one of the links between ponds and composting...

Early on we found that we had some problems in the pond as the water was getting murky and full of algae which, to anyone who knows will then cause a de-oxygenation of the water which leads to a die off of your fish and other aquatic organisms. (some of the farm pest controllers)

What we did to remedy the dark, murky and not nice pond water was to add aquatic plant species like reeds and even (some people are going to hate this) a form of water Hyacinth like the one that invades dams and lakes all over East Africa. Yes it is an invasive that, if not managed, can completely destroy water bodies. (NB) -Do not put this plant in a pond or dam that is not going to be managed and completely remove it from ponds that will be left unmanaged. 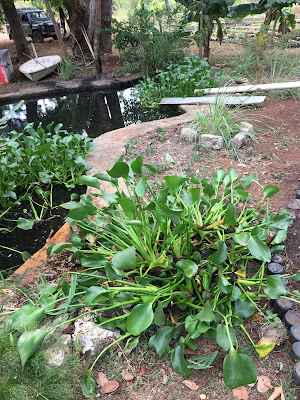 Recently there was some chat about organisations in western Kenya (Kisumu) using Hyacinth removed off Lake Victoria to build compost.

So..we have a problem with the pond water being dirty and deoxygenated, we need aquatic plants to help clean and oxygenate the water so that the ecosystem is complete.. but the Hyacinth is an invasive that needs managing from time to time (removing some).. but we hear it has a use... building compost!!

Yesterday we did our first trials of an experiment we are sure will be a success. Thanks to the Hyacinth we put in two months ago the pond water is now clear all the way to the bottom, the nutrients are cleaned out by the Hyacinth and other plants, the water is oxygenated, the Fish and Tadpoles are happy.

So as the Hyacinth 'invades' and takes up too much of the surface area of the pond (leading to less surface to water oxygenation) we removed around 30% of the Hyacith and put it into the day's compost pile with the fruit and veg from the Sands Kitchen plus dry matter. (See making compost as it is an art in itself).

In terms of multiple uses, we have used the Hyacinth to clean and oxygenate the pond on the farm leading to a heathy environment for our semi-aquatic pest control methods.. and we then control the Hyacinth by turning it into compost. (it could probably do well as a mulch also, just an idea)

Imagine the water is VERY full of Ammonia and Nitrates.. this is now in the Hyacinth we are making  into compost for our farm.

THE SANDS AT NOMAD'S SUSTAINABILITY REPORT

As part of our path towards sustainability there are a number of ongoings each month which help to move us in the right direction. Below ar... 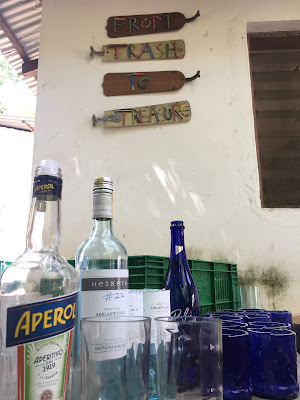