Sometime ago we posted about the benefits of having a pond (or more than one) in and around your farm, to Re-cap, it attracts and holds natural pest control species like frogs, toads, dragonfly, birds etc and it also provides a water source for your other natural controllers like hedgehogs, lizards and the likes.
Well here we will be talking about one of the links between ponds and composting…
Early on we found that we had some problems in the pond as the water was getting murky and full of algae which, to anyone who knows will then cause a de-oxygenation of the water which leads to a die off of your fish and other aquatic organisms. (some of the farm pest controllers)
What we did to remedy the dark, murky and not nice pond water was to add aquatic plant species like reeds and even (some people are going to hate this) a form of water Hyacinth like the one that invades dams and lakes all over East Africa. Yes it is an invasive that, if not managed, can completely destroy water bodies. (NB) -Do not put this plant in a pond or dam that is not going to be managed and completely remove it from ponds that will be left unmanaged. 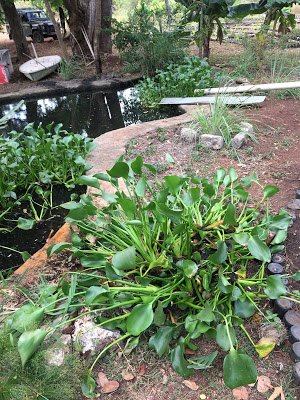 Recently there was some chat about organisations in western Kenya (Kisumu) using Hyacinth removed off Lake Victoria to build compost.
So..we have a problem with the pond water being dirty and deoxygenated, we need aquatic plants to help clean and oxygenate the water so that the ecosystem is complete.. but the Hyacinth is an invasive that needs managing from time to time (removing some).. but we hear it has a use… building compost!!
Yesterday we did our first trials of an experiment we are sure will be a success. Thanks to the Hyacinth we put in two months ago the pond water is now clear all the way to the bottom, the nutrients are cleaned out by the Hyacinth and other plants, the water is oxygenated, the Fish and Tadpoles are happy.
So as the Hyacinth ‘invades’ and takes up too much of the surface area of the pond (leading to less surface to water oxygenation) we removed around 30% of the Hyacith and put it into the day’s compost pile with the fruit and veg from the Sands Kitchen plus dry matter. (See making compost as it is an art in itself).
In terms of multiple uses, we have used the Hyacinth to clean and oxygenate the pond on the farm leading to a heathy environment for our semi-aquatic pest control methods.. and we then control the Hyacinth by turning it into compost. (it could probably do well as a mulch also, just an idea)
Imagine the water is VERY full of Ammonia and Nitrates.. this is now in the Hyacinth we are making  into compost for our farm.
March 5, 2020/by Atti
https://green.thesandskenya.com/wp-content/uploads/2021/04/nomad_recycling_1600_900.jpg 900 1600 Atti https://green.thesandskenya.com/wp-content/uploads/2021/01/thesandsgreen-300x140.png Atti2020-03-05 09:14:002021-06-12 12:13:33ORGANIC FARMING- PERMACULTURE TECHNIQUES- MULTIPLE USES OF THINGS