In natural farms and environments one can expect to find a lot of diverse insect life both inside the soil and above it in the air and on plants. Together all of these various insects (and all other life in the 'web') each on their own little dimensions share their environment and play a vital role in keeping it balanced. When the environment falls out of balance due to the removal of one of the vital parts (which could be as small as an insect or as large as an Elephant), the environment may not have the diversity necessary to have stability enough to be able to bounce back from detrimental events.
One of the best examples of this is how we as humans through commercial agricultural techniques have turned huge areas of the planet into dustbowls which can only produce food if TWO THIRDS MORE CHEMICAL FERTILIZER is put onto to the land than was used 20 years ago. By doing this we have removed huge areas of carbon sequestering grasslands adding to the warming of our planet and this very REAL thing called Climate Change. We have removed the way the soil and the air cleans and regenerates itself so now we can only grow these huge crops in unnatural ways. 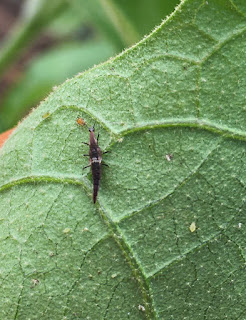 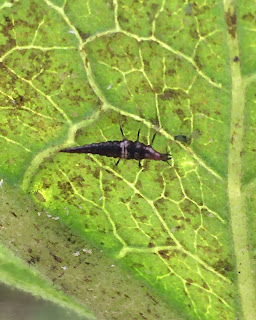 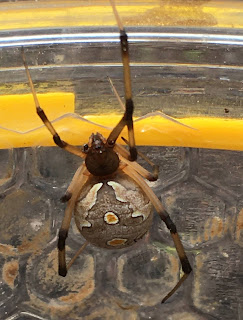 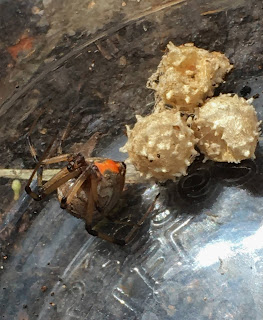 Some of you may be a little freaked out by Spiders, sadly the fear of Spiders is generally quite unfounded, most spiders have 'pinchers' too small to bite a human, many don't have venom that would affect a human and if they do it is often very small quantities.
Spiders are actually one of the most important Natural Askari to have on ones farm, or even 'around' ones house if the initial fear can be gotten over. Spiders are predators for many pests around the farm. ORB WEB spiders use beautifully intricate webs to catch their prey, flying insects. HUNTING SPIDERS are the little guys one see's on the ground, day or night, they are literally hunting for the more crawly or jumpy bugs, like Grasshoppers.
There are other types of Spiders each occupying different 'niches' in the food web, providing a balance against an overpopulation of the bugs they eat. Combine these two examples above, with the Frogs, Toads and Dragonflies (see previous posts) from the ponds and one has added to ones 'Anti-pest Army'... If one then uses Pesticides... they will move away or die.. creating opportunity for pests to arrive in huge numbers unless the buying and spraying of 'toxins' continues... The NATURAL BALANCING MECHANISMS MUST NOT BE REMOVED. 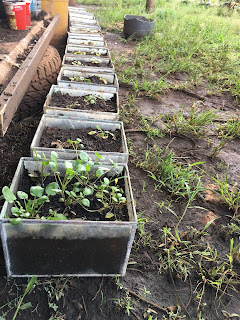 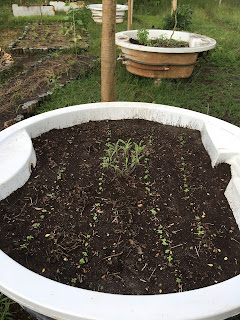 Another way one can try to minimise losses to pests is by using pots or raised beds which can make it more difficult or in some cases impossible for some pests to get into ones crop. In the photo above left one can see Water Kress being grown in some old 'lamp shades' from The Sands at Nomad Boutique Hotel. The higher sides of the 'pots' can create a challenge for crawling pests. Interestingly about these 'lamp shades/plant pots' is that the metal between the panes of glass is Copper.. which as some of you may know is said to deter slugs and snails. (Check out the wood ash experiment we did a couple of years ago that does the same thing.. when the ash is still dry) 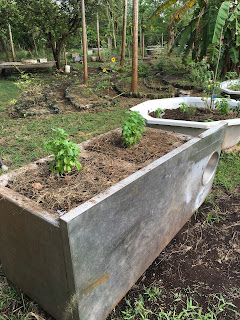 Basil is very prone to being eaten by pests, we have had very limited success with growing it in the ground in the past so we have now taken to planting some of it 'off the ground' in our repurposed items removed from the Hotel and Restaurant over the years.. like this prep chiller or the Jacuzzis in the background.
at November 14, 2020

WASTE USES AND MANAGEMENT- How serious are you?

Did you know that The Sands at Nomad has a 'Green Team' dedicated to managing the impact of the Hotel and Restaurant. Their days ar... 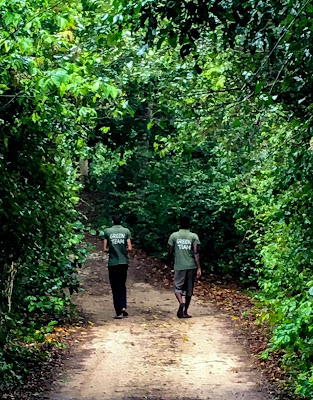