For anyone that has been following our blog we have been dropping in a few tasters of this new project which is looking to find a way to simply repurpose PET plastic bottles into roofing tiles.

During the lockdown over 2020 the ‘Green Room’ near to the Marine Education Centre was rebuilt using glass bottles from the Nomad Beach Bar which were repurposed as building blocks. The floor of the Green room was covered with ‘flip-flop’ waste rubber which was collected off Diani Beach, so all that was left was the roof. 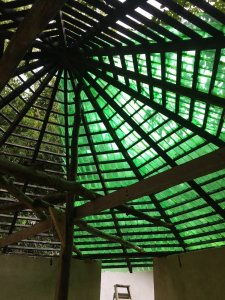 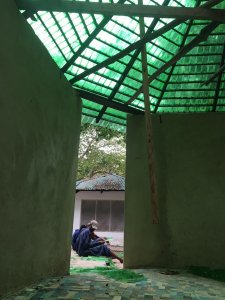 Plastic bottles, which members of the Sand’s Green Team had been stockpiling after collecting from other restaurants and hotels over the years had their tops and bottoms removed, then they were cut in half. 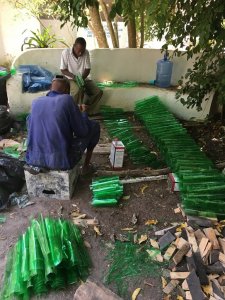 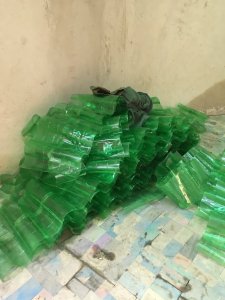 Once in half the halves were then glued to one another to form rows of corrugated plastic sheets. 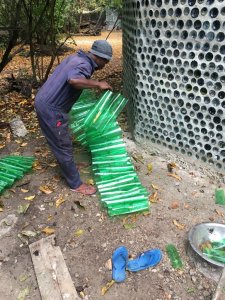 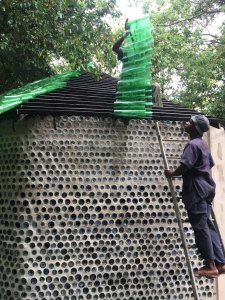 These plastic sheets were then dried before being lifted onto the Green room roof where they were tacked down with the higher row overlapping the lower row much like in building with standard roofing tiles. 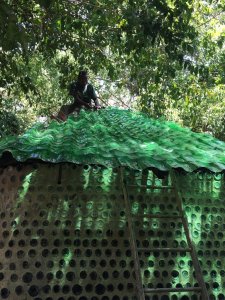 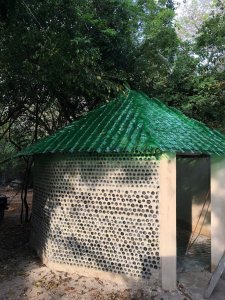 After having managed to complete half of the roof we found that we needed some more green PET plastic water bottles so that we could finish the job. Luckily The Sands at Nomad works closely with other organisations in the area who are also looking to make a difference.
In this case we would like to say a big thank you to The Kwale Plastics Plus Collectors (KPPC) for donating a pickup load of plastic bottles so that we can finish the job.
In the near future the Green room will be used as an exhibition space to showcase our initiatives and projects towards sustainability as well as those of others like The KPPC and the Flipiflopi
February 15, 2021/by Atti
https://green.thesandskenya.com/wp-content/uploads/2021/02/IMG_7166_16_9.jpg 432 768 Atti https://green.thesandskenya.com/wp-content/uploads/2021/01/thesandsgreen-300x140.png Atti2021-02-15 13:16:002021-06-12 12:08:52REPURPOSING PLASTIC BOTTLES- Roofing

THE SANDS AT NOMAD’S SUSTAINABILITY REPORT